What is it like for a boy from a small village to join a Buddhist temple as a novice? 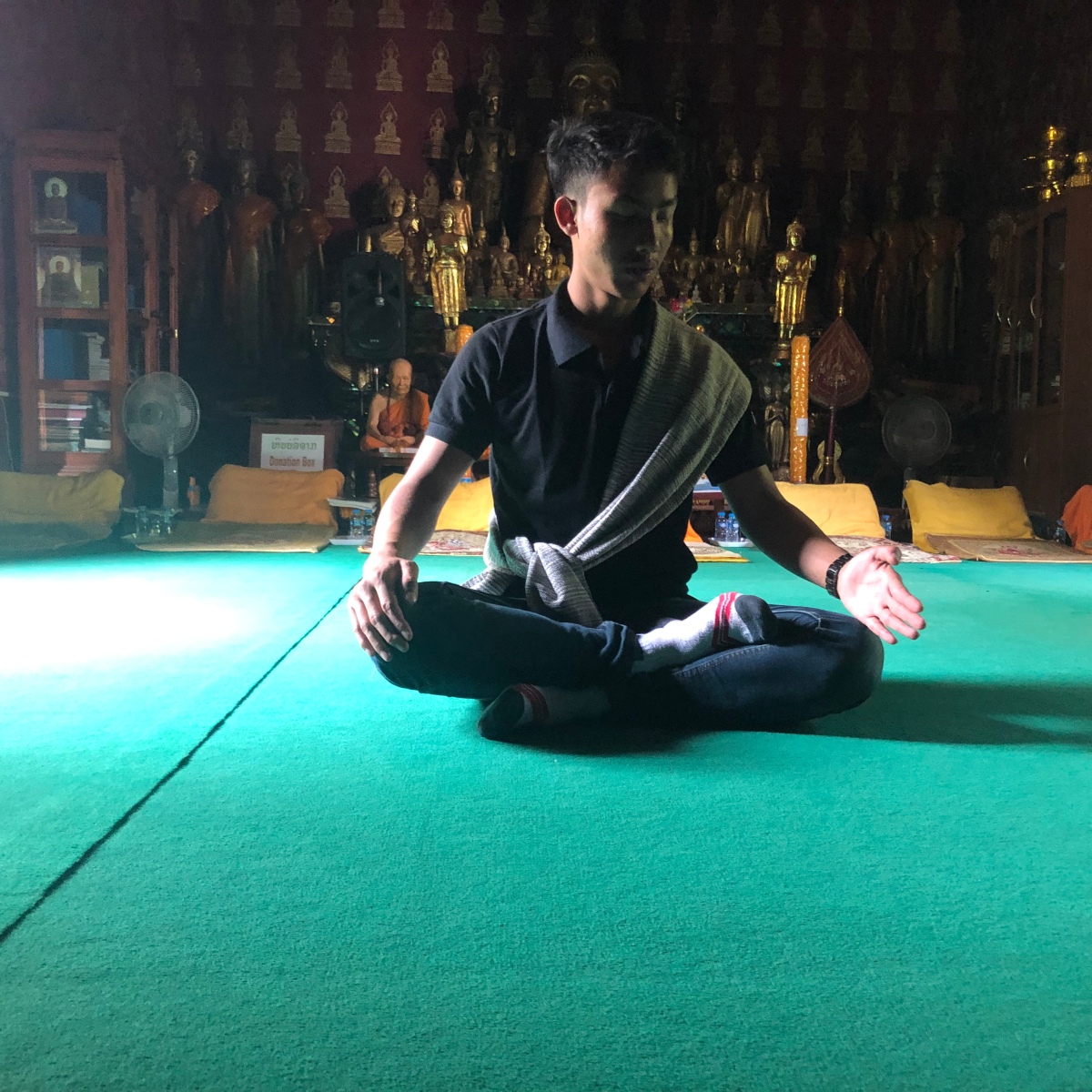 As a former novice at one of Luang Prabang’s Wats, Sounanh was the perfect guide to help me understand life in a Buddhist monastery.  He started his journey when he was nine years old and became intrigued by the monks that resided in his village.  He approached his father stating his aspiration to become a monk and his father suggested he journey to Luang Prabang and spend a week at a Wat to see whether this was the path for him.  One week led to two and then a commitment to spend a year and another until seven years had passed. 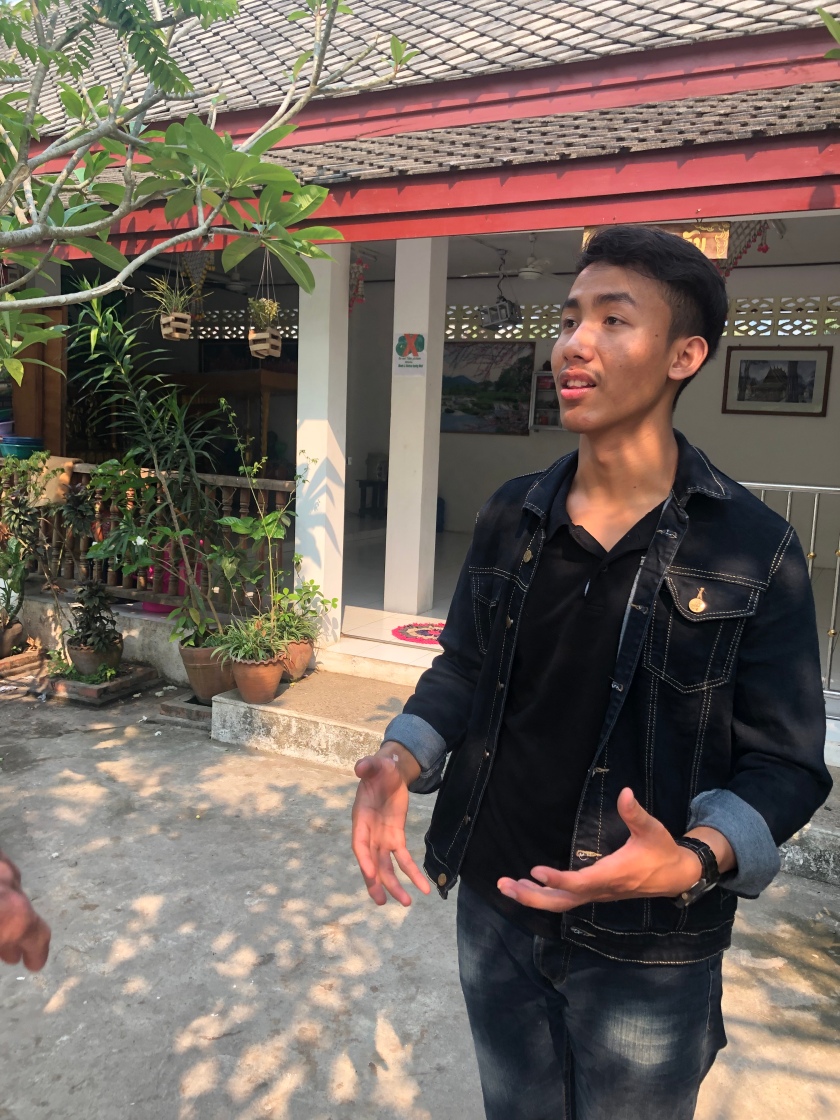 It is not unusual.  It is reported that the majority of male Laotians join a monastery for at least some period of their lives, ranging from a few months to years to an entire lifetime.  While there are public schools, the Wats provide a path for education for many.  They not only learn the ancient chants and sutras but also curriculums that would be familiar to any child in my hometown of Arlington, Virginia from reading and writing to chemistry.

The commitment is not to be taken lightly since life at a temple is very strict.  To be ordained as a monk requires a man to comply with 227 precepts or rules while novices have ten and lay persons are expected to observe five

I fear the last precept may be in conflict with my three-bar night rule.

Days themselves are highly regimented.  Sounanh would rise to a gong rung at 3:30am to prepare for the first round of meditation, communal chanting and prayers at 4am.  He spent many years learning the ancient Indian language of Pāli that is needed to learn the holy texts of Theravada Buddhism, the branch of Buddhism practiced here in Laos.

Slightly before 6am, the drums are struck informing the community that the monks and novices will be walking through the streets accepting alms – primarily sticky rice, fruit and other small offerings of food that will serve as sustenance for their two meals of the day at breakfast and lunch.  The devotion and reverence displayed in this daily ceremony is quite moving.  (See my prior blog post here.)

After returning to the Wat and completing daily chores for its upkeep, Sounanh would head off to school for eight hours before returning to wash, clean, sweep, and undertake other tasks before two hours of meditation, a Dharma talk or sermon by the abbot or a senior monk and then several hours of homework.  After a few hours of sleep, the cycle starts again.

I am at a loss on how they do not collapse from exhaustion but Sounanh assured me that meditation offers its own form of relaxation and rejuvenation.  I know from my own practice that it is easy to slip from meditation to snoring all too quickly.

One of the insights that I found touching was when Sounanh described his life after leaving the order.  There is no shame in not seeking ordination as a monk after serving as a novice.  In fact, there is great honor for the individual and his family in service as a novice no matter how long one stays.  For Sounanh, the decision to leave was driven by his interest in attending university where he hopes to study Chinese, German and technology.

He is now earning money for his studies and working for his sister.  When I probed, I learned that this is not a “sister” as we typically think of it.  His sister is a woman in the community who helped support him during his years in the monastery.  Novices must pay a modest annual fee to support the monastery but they are not allowed to bring possessions or money.  Sounanh’s sister was instrumental in his being able to continue as a novice through her donations.  Out of love and respect he now helps with her business here in Luang Prabang.  It is yet one example of how deeply the lay and religious communities are tied together here in Laos.

After peppering him with questions for more than an hour, we entered a temple to meditate.  Sounanh led me through a sitting, standing and walking meditation.  While I still find walking meditation challenging (I cannot shake the feeling that I look like a zombie as I try to adopt what feels like a painfully slow pace), the hour spent with Sounanh offered that elusive opportunity to be present in the moment and to heighten my awareness.

If you are in Luang Prabang and are interested in this experience, I can’t recommend Orange Robe Tours enough and Sounanh if you are lucky enough to have him as your guide.

3 thoughts on “The Life of a Novice”

Follow McFramblin: Adventures and musings from a gap year that doesn't seem to end on WordPress.com

News, Views and Reviews from the Wonderful World of Wine Since 1999

HistPhil
McFramblin: Adventures and musings from a gap year that doesn't seem to end

Traveling, Listening, Celebrating and Reflecting with an Open Mind and an Open Heart